This celebration gave the participants and the audience a unique opportunity of listening to some of the well learned and hugely respected individuals from their respective fields.

Education expert Dr. Gururaj Karajagi had the first opportunity to address the crowd where he laid emphasis on the parenting aspects and its influence on a child. He eloquently explained as to why parents should not impose their incomplete dreams on their children and put them under pressure.

The audience were given some life-related examples and were taught the finer points of parenting and its positive influence on a growing child, the inputs were readily accepted by the audience.

Dr. R. Balasubramaniam, member of HRD, Govt. of India was the next highly respected guest who spoke to the gathering and shared his knowledge with them. His key message for the parent community was, children are the next resources of our country, and we shouldn’t be impairing their growth by subjecting them to undue pressure and high expectations. He explained the need for children to experience the beautiful nature they live-in and grow in alignment to the environment and not against it. He compared the environments in Delhi & Mysore and told the audience that it was such a privilege for him to be in Mysore and enjoy the clean air and environment of the palace city.

The main takeaway for the parents was, stay away from peer-comparison when bringing up their children and ensure their development & growth happens via learning values and not mere content.

The celebrations which also included a prize distribution ceremony and colorful cultural events was graced by R Raghu, Chairman of Nypunya School of Excellence, Kautilya R, Secretary and Shilpa Prashanth, the School Principal. 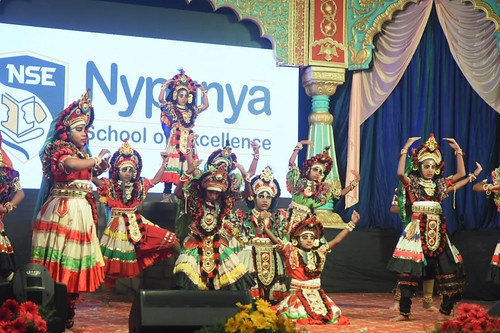