On the occasion of the 75th anniversary of India’s independence the school is celebrating Azadi ka Amrit Mahotsav with enthusiasm and pride. A slew of programmes have been chalked out as a part of these celebrations starting from Group Song to Gymnastics along with speeches. The Indian National Flag is a symbol of national pride for the entire nation. The programme commenced with a fitting prayer service. The chief guest of the day, B. S. Narayana Gowda retired bank officer was accorded a hearty welcome by the students. The significance of the day was articulated with deep sentiments.

The 75th Independence Day flag hoisting was done by retired bank officer Shri B.S. Narayana Gowda who was invited as our chief guest for the programme. Patriotic songs were performed along with various cultural programs. Principal Ms. Shilpa Prashanth, secretary Mr. Kautilya, teachers, students and parents were present in the program. The address was followed by a dance drama depicting the pride of India the National Flag. 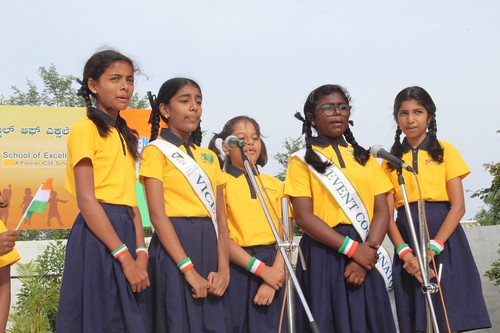